November marks four years since Beijing unfurled the far-reaching 60 Decisions economic reform program in 2013. That began economic policymaking in the Xi Jinping era. This October, the president’s first term finished and a second five-year term began. We choose this midpoint to launch The China Dashboard, an appraisal of China’s economic reform progress. President Xi argued in 2013 that economic development had become unbalanced and unsustainable, and that mounting problems would dead-end China’s growth unless reforms were enacted. This diagnosis impacts not only China’s dreams of domestic prosperity but also the interests of peoples and economies worldwide whose futures are linked to China‘s outlook. Recognizing those interests in 2015, Premier Li Keqiang explicitly welcomed evaluations from abroad on China’s reform performance. The China Dashboard takes up that invitation. We look at indicators not of what Americans or international organizations think China should do, but of Beijing’s own objectives, and how much progress has been achieved so far.

Based on data available at drafting (in most cases, through 2Q2017), China’s economic reform program remains incomplete. Indeed in many areas it appears to have stalled. There has been some progress, for example in lifting the share of innovative industries in economic output, but most objectives are at best standing still. Numerous areas of reform are behind based on the Chinese data we highlight, including labor reform as gauged by wage growth for lower-income migrant workers, competition policy, cross-border investment policy, and fiscal policy reform. Five out of ten areas show at best mixed results, with little movement to date (in financial system, state owned enterprise rationalization, trade, land, and environmental reform). Policy movement, a precursor of future outcomes, is often mixed, with continued public displays of policy resolve, but limited fundamental progress on the ground. China‘s 2013 reform program is key to long-term, sustainable economic growth, and if economic reform momentum does not rise, both China’s GDP potential and its contribution to future international economic development will be depleted. Given the accumulated liabilities from past growth choices, current resistance to reform on the ground, and built-in demographic challenges of an aging population, longer-term prospects face increasing headwinds. 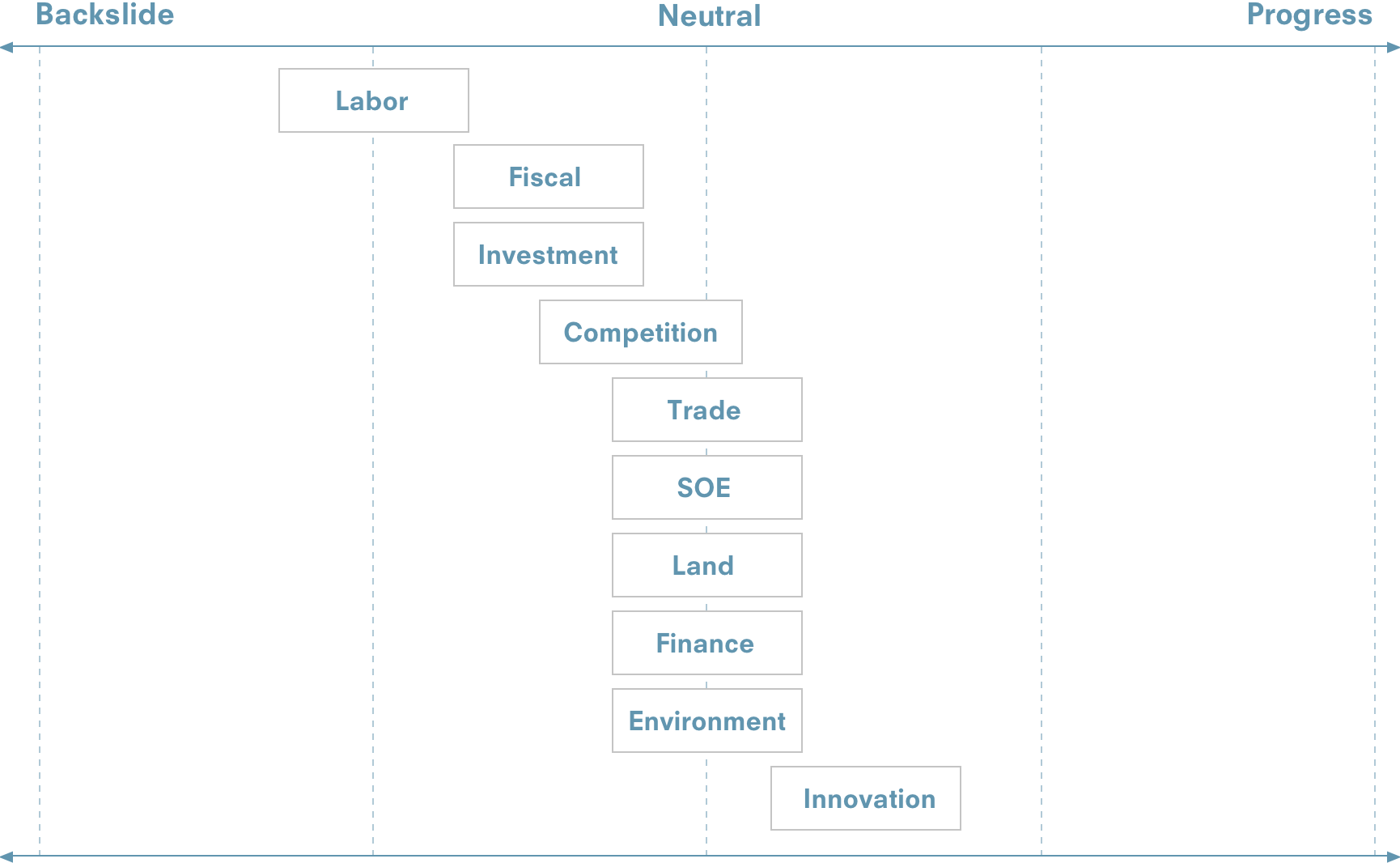 Note: The assessment visualized above is the authors’ judgement based on the primary indicators.

The outlook for China’s economic reforms is a critical factor in the global economy, for major economies and businesses alike. Since 1978, China has made great strides in economic reform, generating both growth opportunities and also disruptions at home and abroad. However this process is far from complete, and the challenges remaining are complex and require increasing regulatory sophistication. This reality, and shortcomings in Chinese data, create uncertainty about the reform outlook, including its pace and direction. For businesses and policymakers in China and abroad, better consensus built on a shared foundation of data is needed to prevent miscalculations and foster confidence.

With a problem-solving mandate, the Asia Society Policy Institute (ASPI) tackles major policy challenges confronting the Asia-Pacific in security, prosperity, sustainability, and the development of common norms and values for the region.